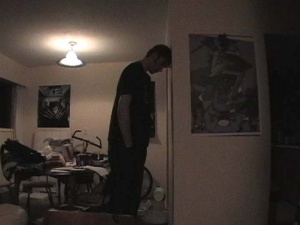 Thanks To: Ash Vickers, Patrick Donison (for putting up with it)

Nearly Special Thanks To: Kate Stark

Five people decide to stay awake for forty-eight hours, and they're chronicling it all for Sheer Stupidity. At first, the video is shot like a reality-TV show, hosted by Jeremy Michaels, but as the hours pass no one wants to bother. The cast slowly loses their ability to parse grammar, keep track of time, and think intelligibly, although they manage to keep themselves distracted. Morgan even works a scheduled shift at work. Eventually, they're so exhausted that they all pack it up. Bill lasted the longest with a whopping forty-five hours.